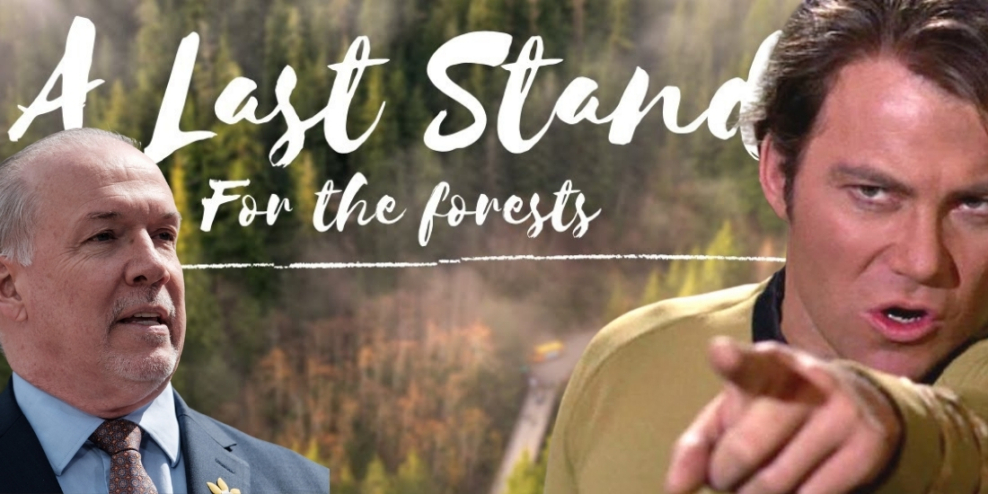 Capt. Horgan Get His Pee Pee Slapped by Capt. Kirk

But chainsaw diplomacy continues to rule the day for Horgan

John Horgan may be a Star Trek fan, but there’s no room for him in the federation unless he changes course on old-growth logging.

While the 90-year old Shatner is in the news for being the oldest person to rocket into space, he is best known as the heroic Captain James T. Kirk of the Starship Enterprise on the original Star Trek.”

The BC Premier is a self-avowed Trekkie. So the criticism from Capt. Kirk probably may cut close to the bone.

“There’s nothing like standing next to a giant ancient cedar to make one recognize how small our place in the universe really is. Some wonders are irreplaceable,” said Shatner, in support of the open-letter initiative first launched in June by the non-profit Canopy. “Premier Horgan, these forests should live long and prosper.”

Shatner is one of more than 200 celebrities, artists, scientists, and indigenous leaders pressuring BC to do more to protect old forests.

Environmental groups often call on celebrities to lend their star power to conservation campaigns. Whether or not it makes any real difference on the ground is debatable.

But what this latest effort does show is that the ongoing debacle at Fairy Creek is becoming a national, even international, embarrassment.

This kind of police intimidation isn’t supposed to happen in Canada. It’s a far cry from Dudley Do-Right.

And it’s all happening in Premier Horgan’s riding.

What happened to his election promise of “immediate interim protection of the most at-risk old-growth to prevent the loss of rare ecosystems?”

Oh, Capt. Horgan appointed another panel to study the matter.

Meanwhile, logging of the last stands of rare old-growth in Fairy Creek and throughout the province continues.

Propping up an industry planning for ten more years of old-growth logging is not the future voters asked for when the NDP was elected to a majority in 2020.

So from one Captain to another – it’s time to be a hero and get your ship back on course, Capt. Horgan.