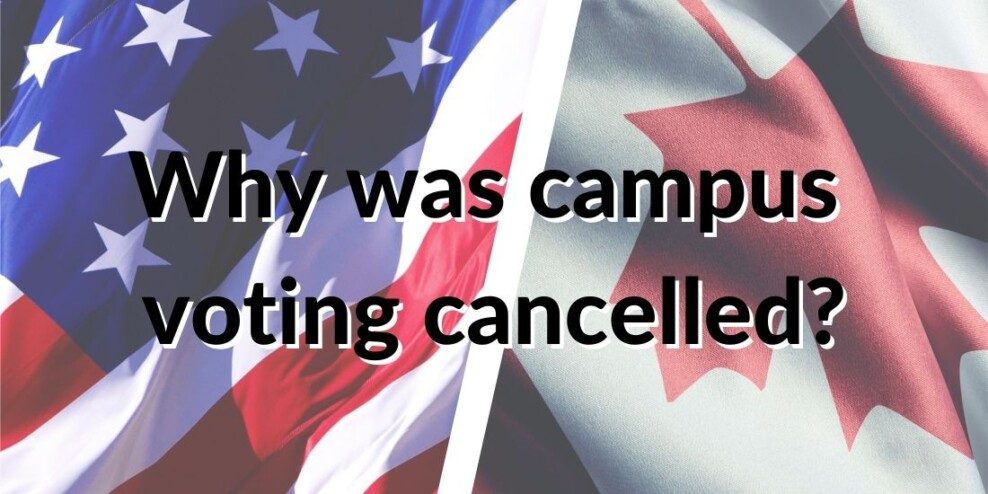 There’s a stench of bias in Election Canada’s recent decision to cancel the Vote-on-Campus program. The program allowed students to vote on more than a hundred campuses in the last election.

But unlike the last two elections, young voters appear to be less likely to vote for Trudeau and fellow Liberal candidates.

Now suddenly, the program is axed.

Does this decision benefit candidate Trudeau and the governing Liberal Party?

Roughly 800,000 Canadians have turned 18 since the last federal election in 2019. Citizens aged 18 to 34 now represent the largest single voting block in the country. They tend to vote progressive, and they have the power to sway an election.

A recent poll on voting intentions among 18 to 34-year-olds placed the NDP well ahead at 37 %, followed by the Liberals and Conservatives at 27% and 23%, respectively. Climate change is in the top three most important election issues, which resonates strongly with young voters.

The Vote on Campus program was introduced in 2015 as a pilot program. It then expanded to 109 colleges and universities in the 2019 federal election, when about 110,000 ballots were cast on campuses across the country. In addition, temporary voting offices were set up on campus, allowing students to vote in their home ridings while away at school.

But Elections Canada abruptly cancelled the program in August, blaming the pandemic and the unpredictable timelines of a minority government.

Some people think it’s a cynical American-style ploy to suppress the youth vote.

Students and students leaders are calling foul. They say the move alienates the youth vote, hurts the left and favours Trudeau and the right.

“There’s youth voter studies out there that show youth believe voting doesn’t make a difference, and I think these types of actions, …, exacerbate those negative trends,” Saad Shoaib, VP external for the UBC Alma Mater Society, in a CBC report.

Miranda Knight, Manager of Public and Network Engagement for the non-profit Community Foundations of Canada, isn’t buying it either.

“Election Canada’s messaging for cancelling campus voting is 1) pandemic 2) short timeline. Yet, they’re asking LTC homes to host locations. Someone explain to me how this isn’t a partisan directive. Harper made the same play,” Knight said in a recent Tweet.

Students are putting pressure on Elections Canada to reverse the decision. A you.leadnow.ca petition had already gathered nearly 20,000 signatures demanding that campus polling booths be reopened across the country.

Record-breaking Year for Pinks in the Tsolum