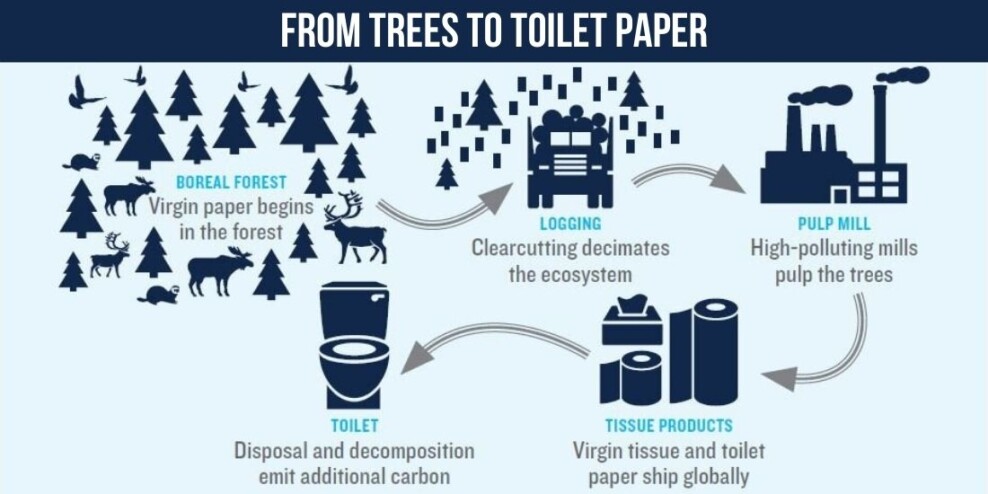 When Someone Flushes Their Toilet in the US, A Tree Falls in Canada

Think twice the next time you horde toilet paper at the grocery store. Because, when you wipe, you could be helping to wipe out Canadian forests. A new report by the Natural Resources Defense Council (NRDC) blames multi-national toilet brands like Charmin and Angel Soft for literally flushing our forests down the old toilet.

In the report, the three companies ranked near the bottom on a scale from A+ to F.

“The companies with the largest market shares have the power to make a significant difference for the future of our world’s forests,” the authors wrote. “Instead, they largely adhere to decades-old tissue formulas that have taken a devastating toll on forests.”

Proctor and Gamble (P&G) owns the Charmin, Bounty, and Puffs brands. In 2020, they committed to look at ways to remove companies destroying Canadian forests from its supply chain. But it was all talk and no walk. Last year, this US-based giant that makes more than $70 billion in annual revenues, increased its consumption of our wood fibre.

That’s a big pooh-pooh for P&G.

These companies are destroying Canadian boreal forests at an alarming rate to make pulp for low-value toilet paper. Our boreal forests absorb massive amounts of carbon. They stretch from Yukon and northern British Columbia to Newfoundland & Labrador and are the largest intact forest on the planet. They also are home to three to five billion songbirds that nest during their great annual migration.

Unfortunately, Canadian boreal forests are also a major source of northern bleached softwood kraft (NBSK) pulp, the preferred base for US tissue products.

According to the NRDC, the average American household flushes 156 rolls of toilet paper a year – roughly 100 lbs.

“As the climate crisis worsens, the tissue industry’s continued reliance on a devastating ‘tree to toilet pipeline’ has become only more untenable,” said Shelley Vinyard, NRDC’s boreal corporate campaign manager, in a recent National Observer story. “Major corporations like P&G must start responding to the pressure and accept their own, much larger, role in the climate catastrophe.”

Our obsession with cheap TP is destroying these globally significant regions at a time when sustainable alternatives to cutting down trees and pulping them into TP. For example, the Who Gives a Crap, 100% Recycled, and Green Forest brands all scored the highest in the NRDC’s toilet paper ranking and used bamboo-based and recycled products.

The big boys like P&G, Kimberly-Clark and Georgia-Pacific don’t seem to care, so it will take stricter laws and consumer snubs to shift the needle on TP.

So remember Who Gives a Crap, 100% Recycled, and Green Forest when you grab that huge package of TP at your nearest Costco or Walmart.