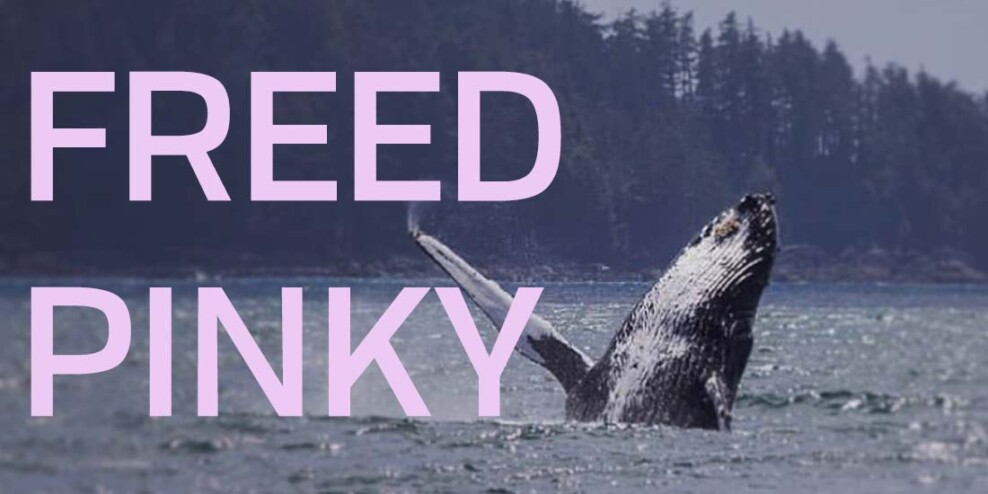 It was a super stressful couple of days.

Pinky, the humpback whale, was spotted off the west coast on October 7th. She and her infant calf were sticking close to the shallows, and she looked like she was struggling.

According to Sydney Dixon, Pinky was caught up in crab trap lines and dragging an orange float behind her.

Dixon is the research and education director for Strawberry Isle Marine Research Society (SIMRS), a registered charity in Clayoquot Sound. She’s also a zodiac skipper for Jamie’s Whaling Station and was on a zodiac when she first saw the distressed whale and her little calf.

She radioed the Department of Fisheries and Oceans Canada (DFO), who came as quick as possible, but they lost sight of Pinky.

“A big fleet of us went out and spread out over Barkley Sound to try to relocate this whale,” Dixon told Alberni Valley News.

After days of intense searching, they still couldn’t find her.

The team was stressed because Pinky migrates to Hawaii every year, and the whales leave the region quickly when that happens. If Pinky and her calf were left behind, they would have had a tough time surviving the winter.

Folks in the region are attached to Pinky. She’s a big mother whale who shows up every summer, and the calf is her 2021 baby.

“I felt a lot of relief, a lot of joy and also a lot of pride for the local community,” she said. “It takes a village. There are so many people out there that really care about these animals.”

If you ever see a whale in distress, you can call DFO’s marine mammal response network at 1-800-465-4336. Then, stay with the animal if you can until help arrives.

And don’t try to take off fishing lines yourself!

You could be “signing that whale’s death certificate,” Dixon said. But, if you don’t get all the gear off the whale, “it would be much, much, harder for professionals to then relocate that whale and identify it as an entangled individual.”

She also hopes that this is a reminder to keep track of all your fishing gear. Fishing is super important in the area, but lost gear can be a real problem for whales.

Roughly 50% of BC’s humpbacks have scars from being caught up in fishing lines.